What’s this all about?#

Once again, the Internet has succeeded at persuading me to buy stuff. When it comes to YouTube creators, podcasters, review sites and audiophiles, these headphones have somehow earned their place in a lot of good feedback all over the internet. As my life went on, things got really tempting when I realized that my music sessions were not as fun as I had hoped

I’ve viewed the QuietComfort 35s (and Bose in general) in three things: It’s expensive for what it’s worth, it’s got the best noise-cancelling technology out there and it’s wireless.

After seeing one in a Bose store in a mall and trying it out for a few minutes, I decided that I should buy them anyway, despite having a good set of audio gear already at home.

How does it feel?#

My very first impression of it was woah. All I did was turn on the headset and placed it on my ears. From then on, I decided to buy a pair because of what I felt – pristine silence. I just had to compare putting them on and off and the noise difference felt so strange and good at the same time. It felt like the air was noisy after turning them off, and there’s that feeling of a vacuum whenever I wore them again.

I then decided to pair it with my phone and tried listening to my music. So far, so good! There weren’t any glaring issues from what I can tell. My ears fit well enough on the cans, the band fits my head comfortably and I can appreciate the music playing through my ears in complete silence on anything outside the cans.

Okay, on the surface, you’re getting these things when you buy one: 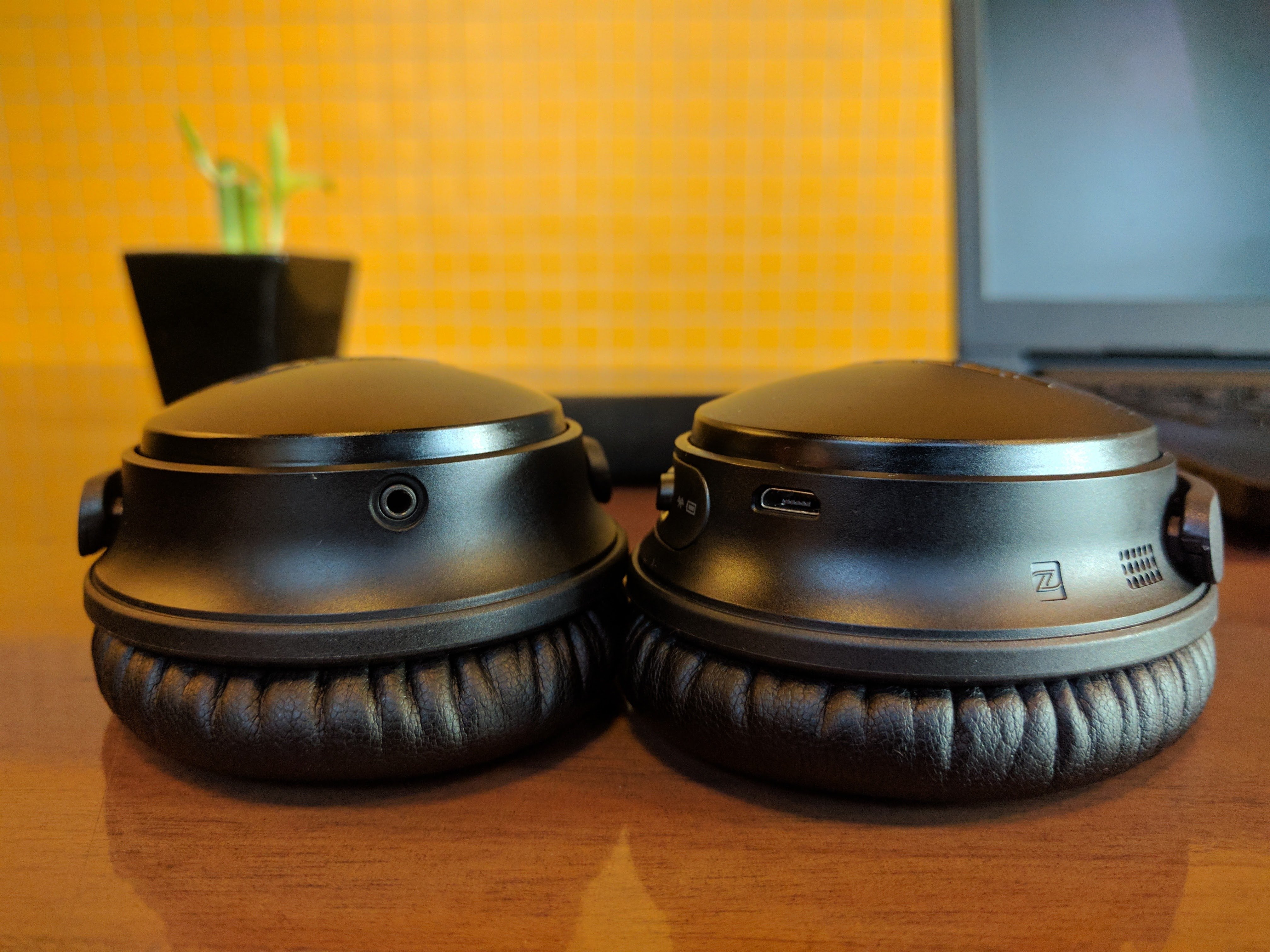 2.5mm jack, a microUSB port for charging and a spot for NFC pairing.

Oh and the box comes with a hard protective case, a microUSB wire, a 2.5 mm to 3.5mm wire and an airplane headphone adapter – perfect for its main use case at cancelling noise.

As I wrote this article down, I felt like it’d be great if I listed where I stand on these headphones:

As I described in my intro, the noise cancellation kicks in the moment you turn these headphones on. You don’t need to have music playing in the background for some sweet silence.

I will point this out though: the noise-cancellation feels like magic BUT it isn’t completely magic. It’s perfect for muffling background noise, but you will still hear loud background noise. Things like the constant hum of an air-conditioner, a slight breeze or a lot of the ambient noise you hear in the streets or a shop are more or less gone, but louder, more direct sounds like people talking (say, a TV or just really close), a fan aimed towards you and other noises may still be heard with these on.

The nice part though? Once you have music playing, nearly everything around you DOES go away even with low music volume. Since these are headphones, it feels great to have only you and your music without feeling silicone tips from an IEM.

Is it worth it? Why not jack up the volume on a normal closed pair of headphones?

Honestly, after I used my old setup again after I wrote this review, I realized that yeah, I can get away with background noise once I focus enough on my music or increase the volume to the point that it becomes indiscernible. I think it’s worth it if you’re a) constantly in noisy environments, b) prefer to listen to low volume music WHILE keeping background noise to a minimum and c) appreciate the plain silence it brings you, without blocking your ears entirely.

As per before, this entire section is subjective. I highly recommend that you give these headphones a try first on their stores before buying one, and try it with your music.

Personally, I’m fine with how this thing sounds. However, I am disappointed with it whenever I’m looking at the price tag as others have exclaimed in the Internet.

Comparing against the Audio-Technica ATH-M50x

For its price, I was expecting it to sound better than my Audio-Technica ATH-M50x cans, but from what I can tell it’s either par or worse when comparing the two. That said, I can live with this audio quality and I think it is slightly better compared to my IM50s while on the go.

So yes, I prefer Audio-Technica’s performance over the Bose headphones. However, I’m rating them differently because the features brought by the QC35s provide a ton of convenience and comfort it brings with its noise-cancelling and wireless capabilities.

Finally, Bose claims an Active EQ feature when using these headphones. I guess I’m adjusting my volume less frequently than I should, but I’m not really noticing it well. 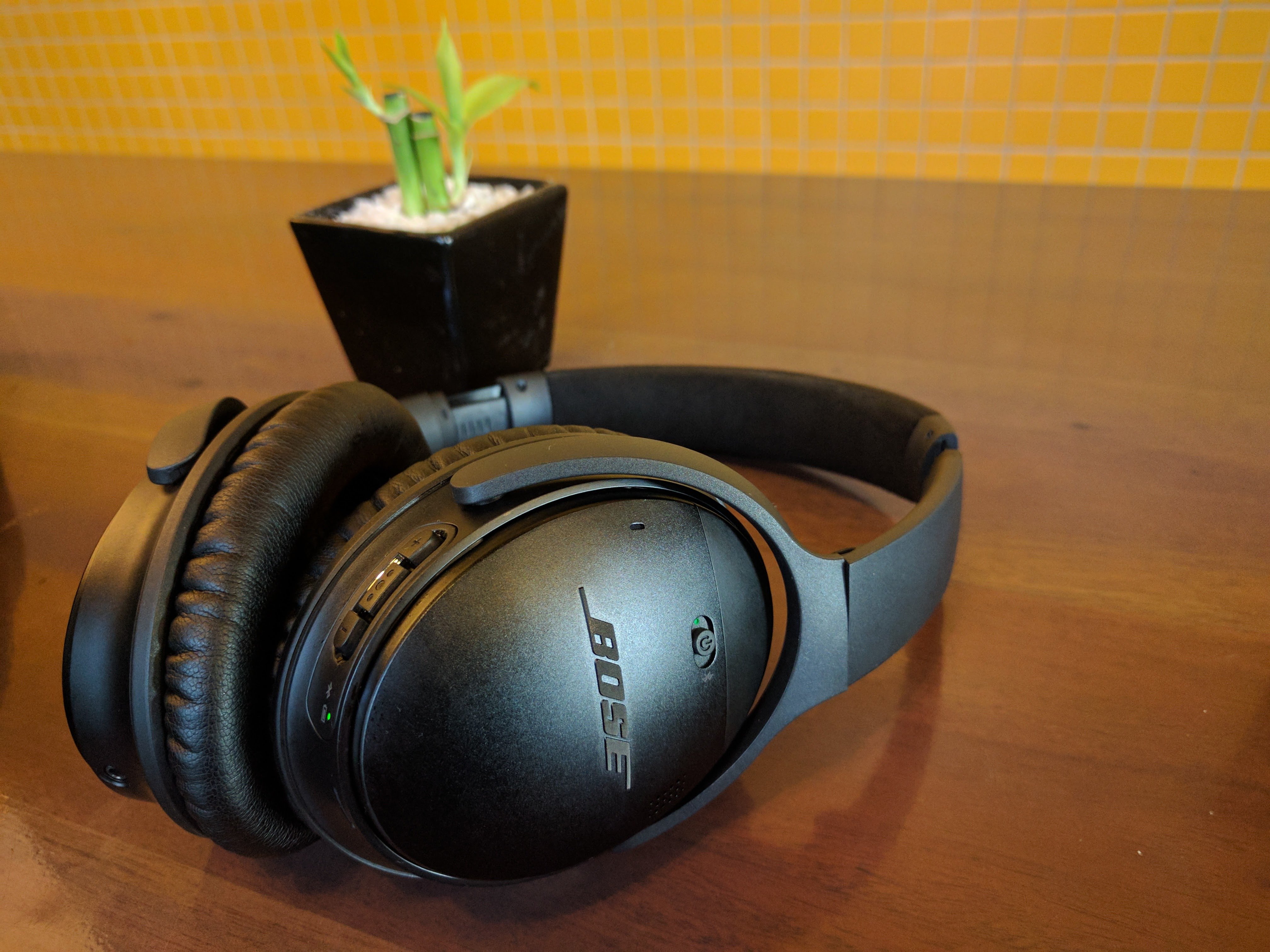 Okay, first off – these are my first ever Bluetooth headphones in my life. My memories on Bluetooth and audio came in the form of those single earpieces meant for calls and while I owned a receiver-to-3.5mm before, it’s not exactly fun to use with its added latency and worse audio quality.

Bose has nailed down the battery life on this thing. It’s generally a tough deal for me when batteries aren’t user-replaceable, but that got settled with great performance from daily use and charging. They advertised these headphones with a 20-hour battery and I honestly think it can do that since I can only consume 10-20% of battery life in my day’s worth of listening to music.

The best part for me is how fast it charges. I can charge 30% in under 30 minutes to an hour, and if that’s enough for a day then I see no reason to feel hobbled with batteries on a wireless headset. Finally, if you’re really desperate for audio and you’re bad at charging your devices then you can opt to bring the wires anyway (although you won’t have the noise-cancelling tech without power.)

There is but one huge caveat about the QC35s that’s common in headphones.

For me, the QC35s are very bad at handling sweat. I’m used to it now, but it’s quite a nasty issue since your ears do get stuffy over time with these on. Sweat WILL form on those earcups and over time, I’m sure it’ll ruin the faux-leather or even the cushion on top of the headband. Knowing that just sucks, really.

I also want to highlight rain because the QC35s have multiple holes that’s used for noise-cancellation and microphones. I just can’t risk these things in the rain with all those. Then again, it’s my fault for not bringing an umbrella in the first place.

They’re a good pair of headphones. I was hoping for better audio, and it’s just good enough compared to what I currently have. This thing shines with its noise-cancellation and wireless capabilities, and those features DO change the way you listen to music in many pleasant ways – especially when it comes to convenience and comfort.

Do I recommend them? YES (8/10) but ONLY if you actually try them out on a store. It’s up to you to decide whether noise-cancelling is actually important to have in your life, and if the audio quality of the QuietComfort 35 actually fits your musical lifestyle.

I answered yes for those two questions, so here I am enjoying them.